What a busy weekend! I started Saturday morning off with some oatmeal with agave nectar and sliced bananas.

Then I decide to go for a nice medium run. It was a balmy 65 degrees outside and the East River Esplanade was packed! I figured that if 40,000 people were going to run 26.2 miles the next day, the least I could do was run 6 miles. I still don’t have a running watch, so I’m not sure how fast I ran it, but it felt pretty good. It was both liberating and a bit annoying not to know how fast I was going. That was my longest run since my marathon on October 11th and I definitely think I need to be doing more 6 mile plus runs.

After my run I finished up my costume and cleaned the house a bit in preparation for my overnight guest – Jenny! When she arrived we headed down to Little Italy for some pasta with our marathoning friend, Neil. We went to Florios on Grand Street and I tried some of their famous Penne Al Vodka. It was delish! 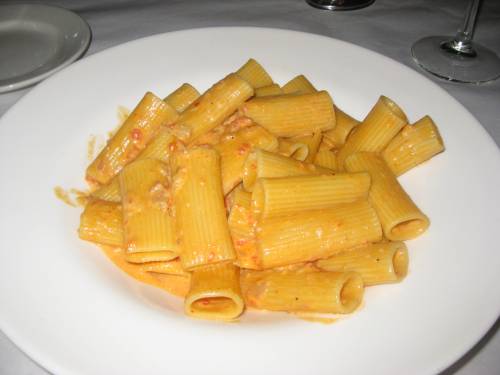 After dinner it was off to a Halloween party where Jenny, Rachael and I were: Snap, Crackle and Pop from the Rice Krispies!

We headed home from the party at a decent hour so we would be well-rested for marathon watching on Sunday. And the marathon on Sunday did not disappoint – it was CRAZY!

The first spot we saw our friend Neil running was at mile 17 on the Upper East Side. It was super packed, so I could only snap a poor picture of him. He was motoring along. Next we caught him at around mile 25 where everything was crazy and loud. After he passed us there, we headed for the finish line to find him in the sea of runners. He looked tired, but also happy!

This entry was posted in Restaurants, Running, Uncategorized. Bookmark the permalink.

One response to “Halloween and NYC Marathon”