Wow – how did it get to be Friday night already?! Let me start with yesterday’s workout after work. I tried another class at my gym called “Urban Rebounding.” Basically, you’re on a mini trampoline the whole time while doing other exercises, with and without weights. It was a really great workout.

My only mistake was taking this class the day after taking “Power Sculpting.” I was already hurting pretty bad and the Rebounding class just intensified the pain. It’s good pain though right?! I think I’m going to try to work at least one of these classes into my weekly schedule. It was nice to mix it up and “trick” my body.

The instructor talked about one thing I really need to work on and that’s continually changing up my routine. He reminded us that when you do the same exercise for too long, without any sort of variation, your body becomes used to it and finds ways to cut corners and do less work. Well my body was certainly stunned into submission the past two nights. Running tomorrow will feel like a breeze.

How do you switch it up and “trick” your body? Do you ever become bored with your routine – how do you spice things up?

I felt like I ate a ton of grains yesterday, so I was really craving some veggies for dinner. I had a HUGE (not kidding – out of control) salad for dinner. It was soo big, I had to put it in a giant plastic bowl, which doesn’t look pretty, but served its purpose. My salad contained: lettuce, cucumbers, grape tomatoes, cheddar cheese, raisins and walnuts with balsamic drizzled over top. 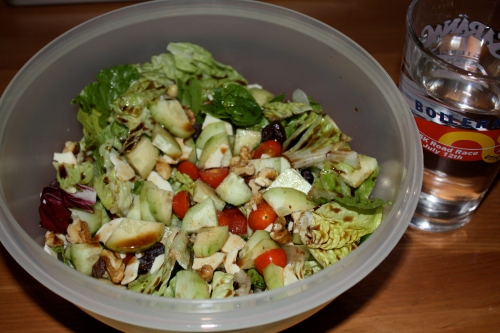 For dessert I mixed a ton of stuff thrown together: pumpkin bread, flax plus granola with pumpkin, pumpkin butter (yay I finally found some!) and blueberries. Obviously the theme was pumpkin. It was so yummy, but not so pretty. 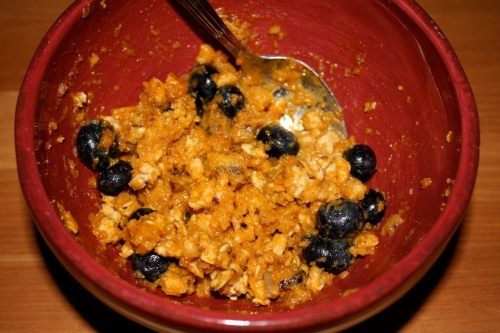 This morning I awoke in pain (literally I was groaning) and decided that more pumpkin would surely help. Hence, my breakfast of oatmeal, flax plus granola with pumpkin, bananas and… pumpkin butter!! MMMMM!

When I got to work I was pleasantly surprised when I remembered we were having a “Health Fair” today! Hurray. Unfortunately, there wasn’t all that much health-related stuff going on. A few gyms touting their discounts, local banks trying to get you to switch to them, and two people giving massages. Slightly disappointed. But then……. we found the smoothy station!! I had this delicious banana and mango smoothy made with low-fat yogurt. I thoroughly enjoyed it – to the point where I got brain freeze from drinking it too fast. 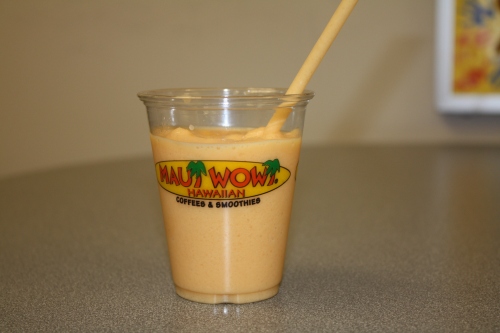 The fun for the day was not over yet! Shortly after the fair, one of my old co-workers (who happens to work right across the street) emailed to ask if I wanted to grab lunch. I was planning on popping out for a salad, so I said yes! We decided to hit up Chipotle. I had a yummy chicken burrito bowl with: chicken, rice, black beans, pico de gallo, cheese and a tiny bit of sour cream. The best thing about Chipotle is that it’s a CLEAN FOOD eatery. And I don’t mean they mop the floors often. What I mean is that Chipotle uses “unprocessed, seasonal, family-farmed, sustainable, nutritious, naturally raised, added hormone free, organic, and artisanal” ingredients. Their motto is “food with integrity.” And for that, they are a good choice in my book.

That lunch sustained me for a while – but I couldn’t finish all of it. So much food. Later in the afternoon I had some Greek yogurt (pineapple flavor – my fave) with oats and it was just what I wanted.

And then miraculously it was the end of the day! Once I got home, I planned to make an omelet, but found my omelet skills are lacking (Bill usually makes them) and instead ended up with scrambled eggs with cheddar cheese, grape tomatoes and green pepper. I added a side of salsa for dipping and a glass of wine and my meal was complete.

Now it’s time for me to relax, drink my wine, maybe catch up on The Soup and a few other shows, and call it an early night. Sometimes Fridays are the best! Enjoy your night.

This entry was posted in Restaurants, Uncategorized. Bookmark the permalink.