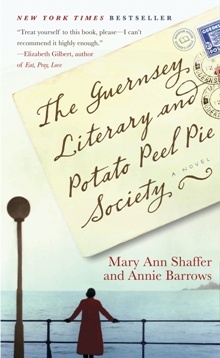 I’ll spell it out for your right upfront on this one – loved it! I wasn’t sure about this book when I first opened it up, what with the strange name and the fact that it appeared to be written as letters the entire time – I was skeptical. And you know how rarely I’m skeptical. J

But I pushed on into the letters and quickly found myself engrossed in the story and in love with the characters. I found myself wanting to live in their little society.

Oh yes, I should probably give some sort of plot overview. The book is narrated by a single, 30-something author Juliet Ashton who has recently written a more humorous book about the war. She receives a letter from Dawsey Adams who found her name in a used book he purchased. They begin writing back and forth and Juliet becomes interested in the “literary society” Dawsey and a few of his neighbors created during the war and German occupation of their Island, Guernsey. And from there Juliet’s next book idea is born and the other society members begin writing to her and sharing literary society stories.

Once I became accustomed to the letter style, I was hooked. However, I did have to remind myself to always look at who the letter was to and from, otherwise things could get confusing.

The story is very unique and the characters are immensely enjoyable. Their letters are quick-witted and, at times, hysterical without meaning to be so. This book tells about the war in a very different way and allows the reader to both enjoy the people and appreciate their difficult situations.

I think some people could read this book and consider it trite or transparent, but I think it’s the lighter approach that makes the book more engrossing and authentic. I enjoyed the tone and the approach.

Overall, I would definitely recommend this book. I hasten to say that I think it is probably tailored more to females, but who knows – anyone might enjoy it. It is definitely a quick read as well, so not too much of a time committment.