The Mohawk Hudson River Marathon was on Sunday, October 11, 2009 in upstate New York. The race started in Schenectady, N.Y. (the town of my alma mater) and continued all the way to downtown Albany. The weather on the day of the race was cool (from about 40 degrees to 55 degrees by the time we finished), but at least it was sunny and no rain was in the forecast

I trained for the marathon with one of my best friends, Lauren. We tried to run as many long runs together as possible. Our longest pre-race training distance was 20 miles, which I ran twice. The night before the marathon, a good friend of ours held a pasta party at her house and we loaded up on spaghetti, penne with vodka sauce and more. It was great.

The Saturday before the race I also made sure I woke up early (7 a.m.), so that I’d be sufficiently tired by the end of the day. It worked. We left the pasta party around 8:45 p.m. and I was sound asleep by 9:30.

Sunday Morning: I set my alarm for 5:45 a.m. and got up immediately (no snoozing). I washed my face and got my running clothes on and then went for some food. My pre-race breakfast consisted of a banana, a granola bar, and an English muffin with peanut butter on it. I’d been eating this same meal before all my long runs as well, so my body was ready for it. I drank two big glasses of water and then drank some gatorade.

Lauren arrived at my house around 7:30 (the race started at 8:30) and we headed to Schenectady. The bad news of the day was that Lauren was very sick. She had been nursing a cold and for some reason it got even worse that morning. I tried in vain to pump her up for the race, but I could tell she was dreading it. I was nervous we were in for a long haul. 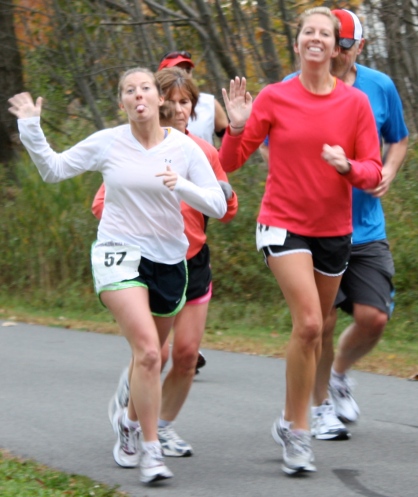 First few miles of the marathon.

We got to the start, picked our spot, jumped around shivering for a bit, and then suddenly we were off. It was such a laid-back start. But we were running and I was praying Lauren would make it through. The first two miles were pretty packed, even despite it being a small race (about 725 runners). We weaved through people and hoped things would spread out soon.

By mile three things had cleared up a bit, but we were running with a pack of people who were pushing us. We were running much faster than I anticipated. We were under 27 minutes at 3 miles. At the 3.5 mark we saw my parents and Bill for the first time and that little sneak (Bill) was taking pictures of us with a brand new camera!! I had wanted the Canon Rebel XSi for a long time and he kept telling me I didn’t need it. But being the thoughtful husband that he is, he thought this would be the perfect time to surprise me. I was thrilled!!

After seeing my parents and Bill at mile 3 (and the new camera), I was pumped and feeling great. Lauren was also feeling much better. At mile 4 we saw our friend Jess cheering us on and that was wonderful. The next few miles, from 4 to about 11 flew by.

Around mile 12 or so we passed a guy running in a loin cloth and barefoot. We think he was running as an Indian or Tarzan. Just looking at his bare feet made mine hurt.

At last we hit the halfway point. I should mention that since about mile 4, Lauren and I had been drinking either water or gatorade at every water station (which was every two miles). Alternating between the two drinks helped I think. So at mile 13 we had a big crew: my parents and Bill again, and then Diana and Aaron were a little bit past them cheering us on. We ditched our long sleeve shirts here and were now running in matching bright mustard yellow shirts. People also started cheering “Go Yellow Team” to us, which we thought was hysterical and very nice.

About mile 14 Lauren’s two sisters and their adorable babies and her Dad were there cheering us on. I still felt good, but started asking to slow a bit here and there. I knew we were running a lot faster than we did in our training runs and it was making me nervous.

We ran along the bike path for a bit just the two of us and I knew things were tightening up. My parents and Bill were there are mile 17 again and I don’t think my waving back to them was as enthusiastic as before.

Mile 18 – we run down a big hill, my parents and Bill are miraculously there AGAIN (they were seriously like the paparazzi) and I don’t realize it until we’ve almost passed. I turn to wave and trip! I don’t fall, but I think this point marks the start of my decline.

We continue on for another two miles and Lauren is absolutely cheerful! I’m experiencing hell and she seems elated. I ask why and she tells me she threw up a bit about a mile back and feels much better now. HA! So now she’s feeling great and motoring and I’m struggling to keep up. At this point we see Kelly cheering for us and she snaps a picture of me during my despair.

Finally, we hit mile 21 and go from the streets of Watervliet (not fun), to the Albany bike path and this is when my body starts to fail me. I’m in such a wretched mood I tell Lauren I don’t want to talk anymore (not that I’ve been doing much besides grunting for the last few miles anyway. But now even a grunt is too much effort). I am focusing on moving each foot in front of the other, but it’s soo hard. And, to make matters worse, almost everyone around me seems to be walking! Oh how it tempts me. I mention this idea of mine to Lauren and she puts her foot down. (And thank God she did). She tells me she will run as slow as I want, but we are NOT walking. I reluctantly agree and push on.

At this point, those mile marker things along the race have become like little beacons of light for me. I begin searching for the next one almost as soon as we pass the last one. I mention how much I love these little yellow cones to Lauren and she starts giving me a heads up when she sees one in the distance.

At last, we hit the 25 mile maker and the light at the end of the tunnel appears. Only one mile to go. We start to pick up our pace a bit, and for once, my body is okay with this plan. Now we can see the finish. We see tons of our friends and family lining the finish area, cheering like crazy. We’re also able to see the finish clock ahead and I’m shocked to see that it’s still under 4 hours! Lauren turns to me at that point and basically yells that we will beat 4 hours!! I agree and we start hurtling towards the finish. I’m on the verge of tears (from sheer happiness) when we cross that line in 3 hours, 54 minutes and 57 seconds!!

I finally finished a marathon – one of my lifelong goals! And what’s the question everyone asked after: So do you think you’ll run another? HA!

For right now, I am happy with this one…but we’ll see – maybe I should try to qualify for Boston. 🙂