It’s Monday (ugh), but first I have to recap Sunday night. I left off after my beautiful run. I wish every weekend could be as nice and cooperate with my plans.

After my run I started cleaning like c-r-a-z-y. The apartment was gross. I stopped after a little bit to have a snack. Triscuits with Laughing Cow Light Original Swiss and two pickles. I LUV pickles.

Cleaning ensued for way too a LONG time. Murphy is terrified of the vacuum cleaner, so he was not a happy camper. But finally, I finished around 4:00 and read a few blogs. Tina’s adapted Workout Cookies sounded divine, so I decide to make them. I used bigger muffin tins and filled them a bit more, so it only made six.

I tried one and it was really good. And then I’m ashamed to say… I ate another one! I know – probably too much for one day, but I felt my long and great run earlier entitled me to a treat.

I was pretty full after that, but knew that I needed to have a “real” dinner a little later. I needed something quick, so I made rice and beans. I cooked the rice with some chicken (bouillon cube) flavoring, corn and onions. Toward the end I added in the beans. We had “pink beans” in the cupboard, which I must have bought because they sounded pretty. They weren’t too bad – added a different flavor to the rice. 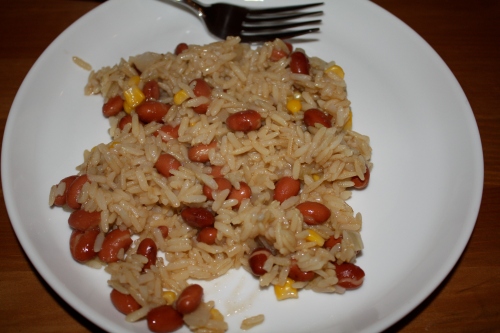 After that, I was very full. The remainder of my night was watching some football, reading and missing my hubby – who was away again this weekend.

Are you a “three square meals a day” eater?

Do you eat/cook differently when your significant other isn’t around?

And so finally we come to Monday morning. UGH again! Murphy harassed me all night, so I’m very tired today. He was snuggling, purring, laying on me and then biting me all nite! Bill came home late and ended up sleeping on the couch because, and I quote, “Murphy was hogging my side.” Don’t move him or anything?! Let the little prince have his way.

Is your pet(s) allowed to sleep on the bed with you?

So I got up late and ended up having a lame-o breakfast of Kashi Cereal.

Lunch was sort of lame-o as well – as salad from a nearby cafe: lettuce, cheddar cheese, walnuts, craisins, peas and carrots. And some Greek yogurt.

My snack for the afternoon will be raspberries and blueberries. I usually have more, but I’m actually going to eat my dinner right before I leave work tonight because I’m going to a book reading/signing at 7:00 p.m. and I know I’ll be hungry before the end of it.

The book is Eating Animals, by Jonathan Safran Foer and the event is at Barnes and Noble in Union Square. I actually don’t have the book yet and I’m hoping the reading will help me decide whether to buy it or not. Here’s a little blurb from the synopsis:

“…Eating Animals explores the many fictions we use to justify our eating habits-from folklore to pop culture to family traditions and national myth-and how such tales can lull us into a brutal forgetting.”

I know he’s probably going to talk a lot about the slaughterhouses and all sorts of terrifying  and depraved circumstances animals are raised in. We’ll see how I do. I’ve already been eating less meat, but I don’t think I could ever go entirely vegetarian.

A full recap of the event will come tomorrow! Hope the rest of your Monday is great.

This entry was posted in Uncategorized. Bookmark the permalink.