It’s Hump Day! We are continuing to inch along.

I want to start off today’s post with some inspirational bloglife. We all have our favorite blogs we read on a daily basis, but let me tell you that I had one of the best feelings yesterday when Katherine passed along the “Beautiful Blogger” award to me. The award was initially passed to her from Gena. I’ve tried to trace the award back to its roots and so far this is what I’ve got: Katherine > Gena > Michelle & Lori > Robyn > Betty > Jolene > Taylor > CaSaundra > Kelly > Shannon > Brandi > Olga > Mica > Caitlin  > Missy > Fei >Louise > Jo > Sarah > Eliza … and this is where I gave up. My gosh – that was like tracing a family tree! Anyone know where this award originated? I think this is such a wonderful and inspirational idea. I love that this award has been making the rounds and want to give credit where it’s due. 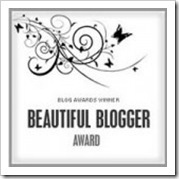 This award asks me to share seven random things about myself with you all, so here it goes:

1. I’m an only child and for that reason, I’ve always secretly wanted about 5 children. I once shared this idea with my husband and he nearly fell over. We may compromise on two.

2. I have a not-so-secret obsession with John Irving – he’s been my favorite author for years. This fall, when I found out he was coming to NYC for a Times Talk event, and there would be a few tickets available at the door, my friend says I acted like a crazed fan trying to get into a rock concert and she was scared I was going to bum-rush the door. We got in – it was amazing.

3. I don’t like bagels. Yes, this makes me a bad New Yorker. I can eat a bagel if it’s all there is, but I would never willingly choose a bagel for breakfast.

4. I have some bad food obsessions: namely cupcakes and nachos. I once went on a cupcake excursion throughout NYC and for the first few years I lived in NYC I also hunted for the perfect nachos. (Favorite cupcake place: Sugar Sweet Sunshine on Rivington; Nachos – TBD)

5. I’m a Great Aunt at 27 (through marriage of course, since I’m an only chid – see #1). I think this is hysterical. Great Aunts sound scary and old to me.

6. I’m allergic to my cat. I take allergy medicine every day to cope since I refused to give him up. He’s my little musher.

7. I love white chocolate – this is one of the strange things my husband and I share.

Now time to pass the award along to seven other beautiful bloggers. I shall pass it to:

This award has been around for awhile (I traced it back to October), so who knows, more than just Chelsea may have already received it!

Breakfast was oatmeal with smashed-up banana and pumpkin butter.

I was thrilled that there was some yummy pasta salad leftover from the previous day’s potluck lunch. My co-worker Tiffany made this (she’s shown up a few times on here before). The addition of artichoke to the salad was wonderful. Great idea.

Perhaps I should have just had this the day before?! 🙂 I also had some blueberry Greek yogurt with granola.

Afternoon snacks included a piece of fancy gourmet chocolate from my chocolate box I received at yesterday’s holiday lunch/secret santa, and two clementines. My clementine kick is back! 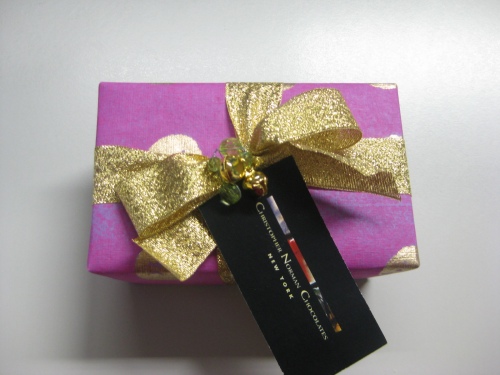 I ate the piece in the upper right with the chopped nuts on it. YUM! 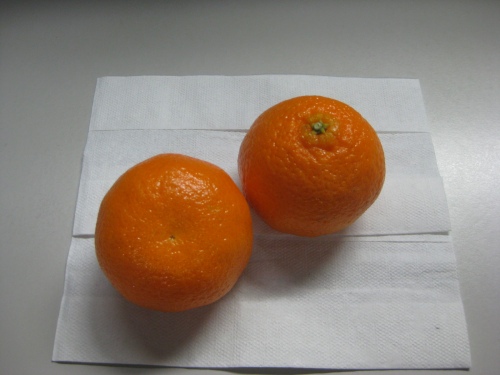 Dinner was a quinoa dish. No real recipe on this, just 3/4 cup cooked quinoa with sautéed green peppers, onion, carrots and broccoli with soy sauce. It was very filling.

For dessert, I decided to finish up the cranberries in the fridge and make cranberry relish in the microwave again. I ate only a bit of it and saved the rest for later. I used 4 packets of Truvia and half a teaspoon of agave to sweeten it up.

The Hubby had his work holiday dinner, so I was in the apartment alone with Murphy. After dinner I vacuumed and tidied up a bit and then considered turning on the tube…but decided against it. I had a lovely t.v.-free Tuesday night and it was rather refreshing.

After cleaning, I grabbed my book and read from about 9 p.m. to 10 p.m. and then fell asleep. It was nice to turn off all the noise for one night. Plus, there really isn’t anything I’m much into right now on t.v.

How bout you – do you watch t.v. every night, do you take a break every now and then, or do you not watch at all?