Happy Monday. How were your weekends? Mine went by in a blur. I sort of feel like I didn’t even have a weekend.

So in immediate exciting news… I just registered for the 2011 Boston Marathon!!! Yippeee! I’m so0 excited and nervous at the same time. There were some issues with the registration page, but thankfully someone on twitter passed around a link that worked. Any other bloggers out there running Boston next April?!

Now on to some race recaps. Yesterday was the Sun Half Marathon and Bay State Marathon in Lowell, MA. I ran the half and my friend, Lauren ran the full in hopes of qualifying for Boston. I’ll start with my race first:

Sun Half Marathon
We drove the full marathon course the day before and I got a chance to see most of the half course as well. It looked pretty flat and not too intimidating. Lauren and I woke up on Sunday morning at 5 a.m. and began our prepping – eating our bananas and Larabars, drinking water and Gatorade. And rotating bathroom turns (sorry, but I’m being honest).

We picked up our other friend running the marathon, Gabby, and headed to the Tsongas Arena around 6:30 and had no problem parking. We waited inside the arena for as long as possible and then went to the start. I thought the half and full marathoners would start together, but they separated us out a bit. I was slightly behind and to the right of the marathon group. So I said goodbye and good luck to Lauren and Gabby and went to my half corral.

The race started and somehow the half marathoners got out ahead of the full marathoners. Lauren and Gabby waved to me as I passed. I started trotting forward at a slow, but comfortable 8:37 minute pace. The start of the race was extremely congested. Then about 2 minutes later I heard my name and turned to see Lauren flying towards me. I picked up the pace a bit to stick with her and we ran together for probably half a mile.

After a few minutes, I realized that Lauren was just moving way too fast for me. I had trained a little bit for this race, but I was nowhere near her speed, so I waved her on and wished her good luck. And I prayed that she would slow down a bit and save some of that energy.

All alone now, I kept chugging along. I was moving pretty fast and I had a feeling that my speed would not last. I also knew that I had two loops of the same course to look forward to… or rather not look forward to. I do not like repeating parts of a course. I like it when I don’t really know what’s coming next and we start at point A and end at point B with no repeating.

My first loop was pretty speedy. Here are my stats:

However, as we entered the loop again, I think I was feeling kind of down about the fact that I’d have to do it all over again. And my lack of training really started to show. I ran the second loop MUCH slower:

So yeah – as you can see, the second half was a rough one for me. But I was happy with my pace and time overall considering my lack of training. It’s actually my slowest half marathon time yet, but I’m not beating myself up about it.

Bay State Marathon – Lauren’s Race
As I mentioned, it was a crowded start and I think that really frustrated Lauren. She was in BQ mode and was flying past people, trying to weave around the slower runners. We met up during the first mile and then she took off just as we passed the first mile marker.

She told me that she then proceeded to run sub-8 minute miles for about the first 8-10 miles of the race. That is SUPER FAST! One of her splits was around 7:30!! Eekk.

And so can you maybe guess what happened? She used up all her energy and by the time she hit Mile 22 things started to go downhill. She became nauseous and dizzy and then she actually got sick. She tried to drink water and Gatorade and refuel, but to no avail. Her split between 22-23 was in the 11+ minute range and those last few miles felt unbearable.

I was waiting in the finish area watching as 3:40 passed and then I was just hoping that she was okay. I was so relieved when she ran into the finish area. She saw me and started apologizing for not coming in under 3:40 and all I wanted to do was hug her. Instead, I screamed that she was awesome, it was totally okay and that she needed to run her heart out to the finish. And she did.

She finished in 3 hours and 45 minutes. A personal record and a pretty freaking fantastic time if you ask me!! I know she was disappointed at first, but then she realized that now she’ll be able to watch me run Boston instead and cheer me on with my husband! She was also pretty relieved that she didn’t have to start training for another marathon in December. 🙂 I luv ya Lauren – you did awesome yesterday!!

Lastly, I do want to mention that the post-race food for the half and full was AMAZING! Soup, peanut butter and jelly sandwiches, chips and mini candy bars. It was the best I’ve had so far.

So that was our intense race weekend. We drove home from Lowell, MA and I arrived back at my parent’s house and ate a big bowl of homemade soup my mother had made.

Then Hubby arrived at my parent’s house and we packed up our things to head home. Before we left, we each had a piece of anniversary cake that my mom made for our two-year wedding anniversary! 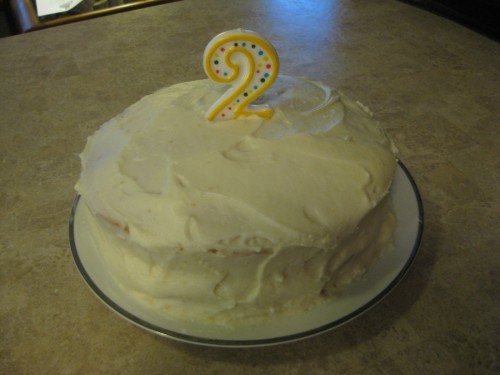 Looks like a mini wedding cake, doesn’t it?! It was delicious. Thanks Momma!

Happy Anniversary Hubby – I love you and can’t wait for many, many more anniversaries to come!