Living in NYC and away from our family can be tough sometimes when it comes to planning for holidays. We understandably can’t make it home for every holiday. We try to go upstate as much as possible, but sometimes it just doesn’t happen. When Hubby and I started signing up for 2012 NYRR races this year, we completely forgot to check what weekend Easter was going to on. So, we signed up for the Scotland run and didn’t realize it was on Easter weekend until a few weeks before it. We decided that maybe this year we would spend Easter weekend in NYC. Sometimes it’s also nice not to have travel on a holiday weekend with all the masses and crazy drivers.

This meant that the domestic and traditional side of me decided I needed to plan a nice holiday dinner. Yes, it was only the two of us. Yes, there was no particular need to go all out. But my inner Betty Crocker had some plans of her own.

After church and some spring cleaning on Sunday, I set to work to make a respectable Easter dinner. I decided earlier in the week to make ham – note that I’d never made it before. If you’ve made ham then clearly you know this was the easiest part of my meal. I don’t know what I was expecting or why I had built up in my head that this was going to be an undertaking, but it was not. I bought a ham at the store, took the plastic wrapping off, added 1/2 cup of water to a pan, put the ham on the pan, covered it with foil, and cooked it in the oven for an hour. Boom – ham done. Simple as that. I even bought a pre-cut ham, which made the whole process even easier. 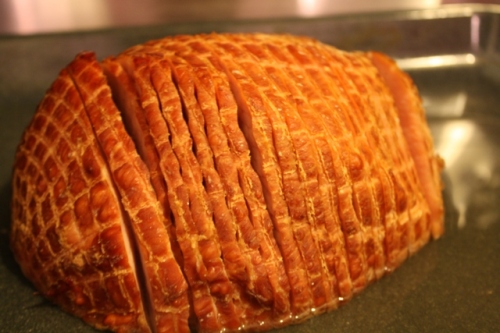 Next up on my list was scalloped potatoes. This was kind of a process. I would say my prep time took about 30 minutes for all the slicing and dicing of the potatoes and onions. Here is the recipe:

Directions
Preheat oven to 400 degrees F (200 degrees C). Butter a 1 quart casserole dish.
Layer 1/2 of the potatoes into bottom of the prepared casserole dish. Top with the onion slices, and add the remaining potatoes. Season with salt and pepper to taste.

In a medium-size saucepan, melt butter over medium heat. Mix in the flour and salt, and stir constantly with a whisk for one minute. Stir in milk. Cook until mixture has thickened. Stir in cheese all at once, and continue stirring until melted, about 30 to 60 seconds. Pour cheese over the potatoes, and cover the dish with aluminum foil.  Bake 1 1/2 hours in the preheated oven.

The end result? A total success! This recipe made a LOT of potatoes. We’ve pretty much been eating them all week. Along with the potatoes, I baked some asparagus. I placed the asparagus in glass pan, covered it with butter, parmesan cheese, garlic powder and onion powder, then put some foil over the pan and popped it in the over for about 30 mins. And here’s my plate:

I also threw together a tossed salad for us and enjoyed some wine. And we even used our diningroom and ate at a proper table. I know that probably sounds weird to a lot of people, but I feel like most NYCers will get it. I think that a lot of city people, with small spaces, tend to eat in their livingroom areas for the most part. A lot of NYC apts don’t even have a diningroom. And although we have one, we RARELY use it and I don’t really know why. I mean, it looks really nice and inviting, right…. 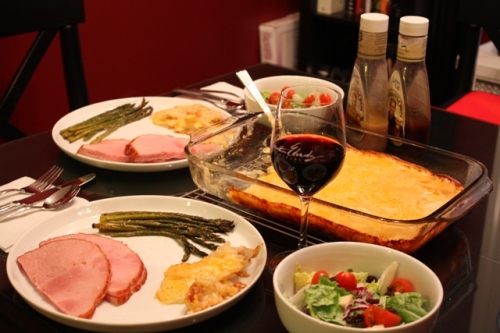 So we had a very proper Easter dinner in the diningroom and everything. How fancy. And lastly we had some delicious oatmeal chocolate chip cookies for dessert.

How was your Easter? Did you travel to visit family? Stay at home? Host a dinner?

And now we’re into the next week already, which is Week 12 of marathon training. This is a cut back week for me and I’m really liking it so far. I ran 6 miles on Monday night and then managed to drag myself out of bed on Tuesday morning for a quick 4 miles. I’m hoping the rainy drizzle will end by later today so I can squeeze in 7 miles after work.

It’s so strange for me to think that last year at this time I was getting ready for the Boston Marathon. It does NOT feel like it was a full year ago. What an amazing race. Of course, with the new, ridiculously hard standards, I’ll never make it back there again. So I will just relish the memories!

Who out there is running the Boston Marathon this year? Good luck to all you runners!!

Good morning – Happy Friday!! We made it through the first whole week of 2010. Yippee! Are you all completely ready for the weekend? I am.

I’ve got to eat well today and remember to drink a good amount of water for my race tomorrow morning. It’s a 5-mile race, which is a distance I’ve never raced before, so I’m interested to see how I handle that. It might be tough to find the right speed.

Let me do a quick recap of yesterday. Breakfast was oatmeal with raisins and pumpkin butter and a side of light cranberry juice.

I had an early morning snack of an apple (unpictured) and then for lunch I had the last of the quiche I made earlier this week. That certainly lasted a while.

Afternoon snacks were peach Chobani yogurt (pineapple remains my favorite) with granola and some carrots.

I may have also had some unphotographed rice chips 🙂 If you eat Chobani, what is your favorite flavor?

Toward the end of the day, I prepared to leave work and head to the gym and realized as I was going through my bag that I didn’t bring any workout socks or a sports bra. Where was my head? I considered going home and getting that stuff and then heading to the gym, but knew in my heart it wouldn’t happen. I’ve been a big 2010 slacker so far when it comes to hitting the gym and treadmill. I’m hoping my first race of 2010 will get me back into the swing.

So instead, I came home and experimented with this recipe. Here’s how I changed things a bit:

I purposely picked a recipe with meat in it for the Hubby, but then he tells me that he’s not the biggest fan of ham. He did eat all of it though. Here is the result: 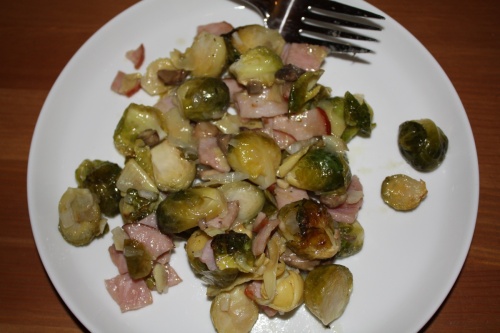 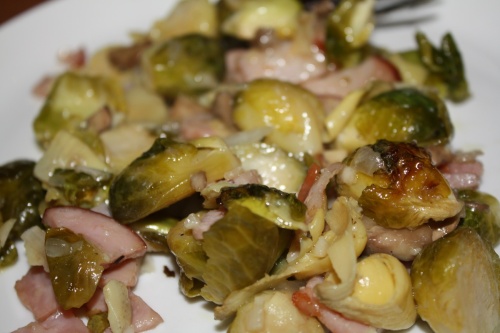 While this was the first time I ever cooked brussels sprouts (YAY!), apparently artichoke has been the real star of my week. I had the artichoke and spinach dip at dinner with Katie on Wednesday night, this last night and I plan on making a pasta salad and adding the remaining artichokes tonight.

But why shouldn’t it be my star this week? Artichoke has many health benefits. This site discusses some of its benefits at length, including:

“Globe artichokes are an excellent source of dietary fiber, magnesium, and the trace mineral chromium. They are a very good source of vitamin C, folic acid, biotin, and the trace mineral manganese. They are a good source of niacin, riboflavin, thiamin, vitamin A, and potassium. The artichoke has strong choleretic activity (promotes bile secretion in the liver), and choleretics increase the excretion of cholesterol and decrease the manufacture of cholesterol in the liver.”

Not only that, but I love the unique kind of bitter taste of artichoke. It definitely adds a punch of flavor to any recipe.

I will say that although I’m not a huge fan of ham, I did really enjoy this recipe. I might try it again with vegetarian sausage as a replacement for the ham.

Lastly, before it hit my bedtime I had a little dessert:

I spent most of my evening at home trying to organize my email after switching my personal email address from my maiden name to my husband’s name. There is still quite a bit that needs to be done, but gmail is a system that definitely helps make things easier and I thank them for that. Gmail is one of the best “technological” decisions I made in the last decade, along with buying a Mac.

What about you – are you a Gmailer? What tech-savvy things did you try in 2009?

In August of this year it will be time to upgrade my phone and it seems I’ll need to choose from either the Droid or a Blackberry (Verizon). Both really scare me – I am so behind the times when it comes to phones. I hate the touch screen stuff, but everyone else seems to love it! I might be forced to get with the times.

That’s all for now folks! I may have a book review of Ahab’s Wife coming later this evening though. And tomorrow I’ll let you know what I’m reading now…so far it’s pretty darn good! Have a great Friday!