Good evening blog world. How was your weekend? Mine was very good and busy. Saturday started off with some much-needed cleaning. But not before I had a decent breakfast. Banana oatmeal with peanut butter and flaxseed meal. 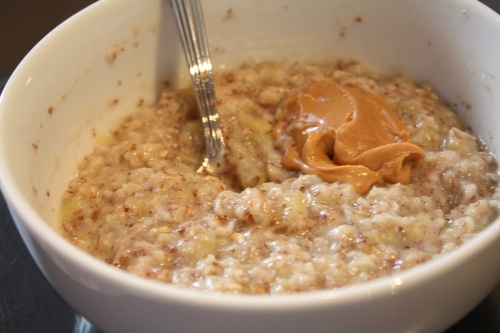 Later in the afternoon I had a light lunch after my cleaning and before heading out for dinner.

I decided not to run on Saturday in order to give myself some extra rest before Sunday’s race.

Around 4:30 I headed to my friends’ apartment in Hell’s Kitchen to meet their two new little kittens. Sorry no pics, but they were absolutely adorable. Then we headed out to dinner in their neighborhood. It took some searching before settling on Casellula, a wine and cheese bar a bit off the beaten tourist path. Hell’s Kitchen definitely has a TON of restaurant choices, but I get a bit frustrated with the really touristy places. This place was located between 9th and 10th Ave. on 52nd  Street. It has a really big wine and cheese list. Two things I love.

We started off sharing the Endive Salad, which had crumbled blue cheese and pear.

It was a very unique taste and I enjoyed it.

Next we moved on to the Chistorras in a Blanket…

These little guys were a wee bit spicy, but delicious nonetheless. After finishing these off, we shared a cheese plate. 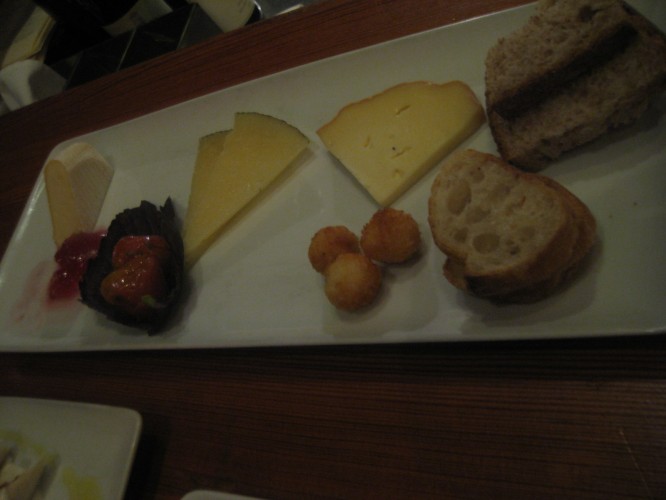 We ordered Willow Hill Farm La Fleurie and two other kinds that aren’t shown on their online menu, but were delicious.

And then lastly, we saw another table order something that looked divine. We decided we needed to try it.

My apologies, it is an awful photo of the Ricotta Crostini with Orange Blossom, Honey, Hazelnuts and Lemon. This was so good. I’m very happy we ordered it. It was my favorite by far. Next time around, I would love to try the Mac N’Cheese! All in all, this meal was very good. With three of us sharing three different dishes and a cheese plate with one glass of wine each, it came to about $30 per person – not too bad for tapas actually. However, we did notice that they gave us only 3 portions on each plate, while others seem to get 4-5 portions even though there were only two people. We thought this was a bit unfair to charge us the same price when we were getting less food. What is the standard with Tapas?

Race to Deliver (4 miles) Recap
I headed home early last night because I had to be up pretty early for the 4 mile race in Central Park on Sunday – the Race to Deliver.  I went to bed around 11:00 p.m. and had a tough time falling asleep. Then things got much worse when a bunch of either college kids or young 20-somethings were outside drinking in the backyard area behind our building until 4:30 in the morning! And they were not quiet. There were girls screeching and cackling all night long. I think I was able to sleep through most of it until about 4 a.m. when they got REALLY loud. Finally at 4:30 a.m. I think my first-floor neighbor had had enough. I heard someone come out and scream angrily at these kids. At first one guy tried to yell back and, I don’t know, I guess assert their right to be obnoxiously loud. However, once I heard the mention of police in the conversation, things got significantly quieter very quickly. I was able to go back to bed until about 6:45.

Then I got up and had some oatmeal for breakfast as some pre-race fuel. I jogged over to Central Park a little before 8:00 a.m. and found my corral. This was my very first 4-mile race. For some reason, I thought I’d run one before, but I think it was actually the race I skipped out on in the summer. I was excited to give this new race length a try.

The race began and very quickly we were headed up Cat Hill. Not fun. However, I told myself to stay strong because it was really going to be the only big hill during the whole race. I made my way up the hill a little slower than I wanted, but was happy to have it behind me. It was around 40 degrees outside, which made for a chilly pre-race, but was perfect for racing.

Mile 2 went by in a blur. I felt like I was moving really fast. I decided not check my Garmin until around mile 3 – I just wanted to push hard and see where that took me, regardless of what Garmin said.

I felt really great throughout this whole race. When I finally looked at my Garmin at the 3 mile marker, I was pleased to see it showed around a 7:42 minute mile. I started to push a bit harder as I neared the end.

My official finish time was 30:48. Average pace was 7:42 minute mile. Here are my splits per my Garmin:

It was a really great race and I was happy with my time. I’ve got another 4-miler in December that I’m even more excited about now.

After the race, I showered quickly and then headed out for a blogger brunch. More on that in the next post!!