Holy moly it’s cold outside! I left the house this morning and the temperature gauge was reading a chilly 23 degrees. Yikes. And I couldn’t find my hat, so it was not a very pleasant commute.

I also stepped out the door and found myself walking onto a t.v. set pretty much. There were Gossip Girl trailers everywhere! I didn’t have my point and shoot camera on me (left it at work), so I asked Hubby if he wouldn’t mind taking some shots before he left for work. I also saw the t.v. studio’s “snack caravan” set up just up the street. Must be nice!

As far as my snacks go, here are yesterday’s eats:

Breakfast was rather boring – Kashi Heart to Heart cereal with Almond Milk. Yes, you read that right, I gave almond milk a whirl and have to say that I really liked it. I used it again today and it was so good. I’m not vegan or opposed to drinking cow’s milk, I would just like to cut back my dairy intake wherever I can. I don’t think it’s entirely necessary and my stomach tends to feel better with less of it.

What kind of “milk” drinker are you? Dairy, soy, rice, almond? 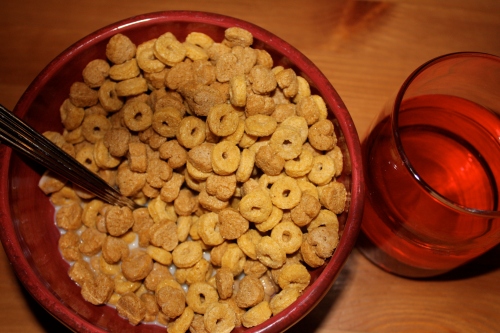 I’ve been eating Heart to Heart for a while. But after visiting Tina’s new NuVal blog and exploring the “Trading Up” section, I might try the Kashi 7 Whole Grain Cereal Puffs. It received such a high NuVal score!

And my afternoon snacks were supposed to be Greek yogurt, a few Rice Works chips and two clementines. But it ended up that I ate two helpings of the chippers and then didn’t want the clementines later. Oops.

I came across this NY Times article yesterday and found it pretty interesting:

Ready to Exercise? Check Your Watch

It talks about how the different times you workout (morning vs. evening) can affect how “good” your workout is. I always feel like I’m stronger and faster in the evening, which apparently is the norm for many people. Although I do also feel very proud after completing a morning workout – not so much because it was fast or hard, but just because I actually got through it!

When do you feel at your best as far as running or working out goes?

After work I had an appointment to go to, so I ended up skipping the gym. This week hasn’t been as great as I wanted as far as running and the gym are concerned, but I’m slowly getting back into it.

The past few days have been filled with lots of grains, so I was really craving some veggies for dinner. Bill was at a work happy hour, so I was solo. I made myself a nice big salad with romaine lettuce, asparagus shavings, cucumbers, grape tomatoes and goat cheese. 🙂 And I had some leftover couscous on the side. 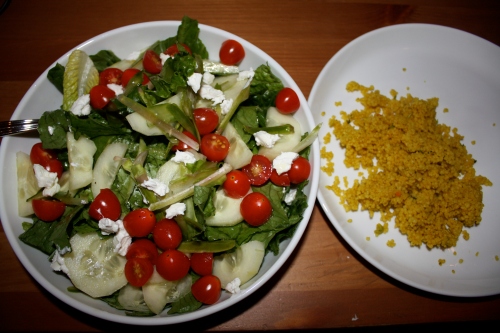 I actually stopped and got cranberries to make the cranberry dessert, but then lost motivation and had this instead. 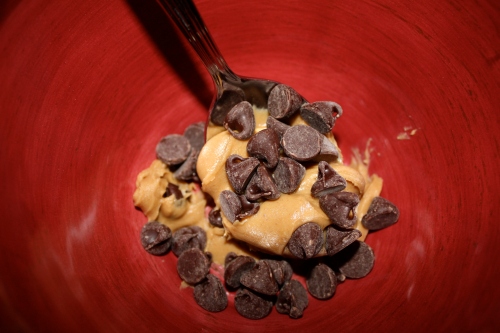 I’m ashamed to say that I also watched a bit of Jersey Shore last night as well. It’s just so God awful that I couldn’t turn away. Thankfully, I got sidetracked and eventually moved on, but I’ve heard from a bunch of people that they find themselves watching in horror as well.

I was toying around with my Rebel camera settings a little later and caught this picture of Murphy with a  litter nose.

I read a little bit of my new book Ahab’s Wife and am getting into it. It’s historical fiction, which I typically really enjoy (like The Other Boleyn Girl). So far the main character “Una” has been through a lot and has grown up tremendously. You start out with her as an adult, married to Captain Ahab (yes, the one from Moby Dick) and she is giving birth to his child, and then the story flashes back to her childhood and we learn where she came from and how she ended up with Ahab. At least that’s where I’m assuming it’s going. Right now she’s only 16 years old at the point I’m at. 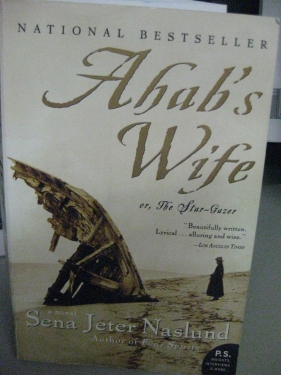 I swear, I’m going to write my David Copperfield review this weekend! I’m looking forward to tonight – Happy Hour with Rachael – and then a weekend of relaxation and running. Hope I don’t freeze!

Happy Friday and have a great weekend!

This entry was posted in Books, Running, Uncategorized. Bookmark the permalink.