Good morning all – back to the grind, right? Ugh – I am not feeling well at all, hence the serious lack of posting this weekend. The weekend started out okay – I headed to Brooklyn to visit my friend Katie for some dinner and drinks.

Although, I noticed even before I left work that I felt a little off. I chalked it up to allergies and headed out to BK. We had a very fun night in Williamsburg. We went to the Manhattan Inn for dinner, which is a very small restaurant that is just adorable. Great ambiance. They even have a piano player placed in the center of the room.

They don’t have a menu online, but our/my food went like this: cheese plate (we got the last one available), bread with apple butter, mushroom spring roll things and then as my main meal I had the Vegan Polenta – per the waitress’ recommendation. Everything was amazing. The lighting was really poor, so these are the only pics that are post-worthy. 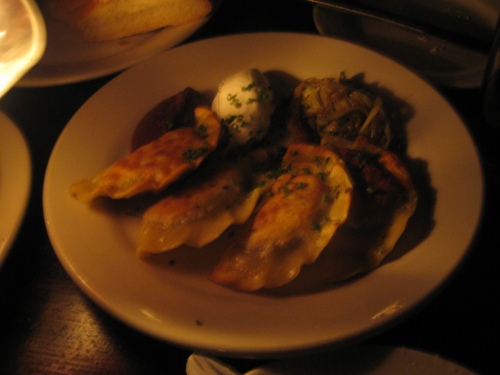 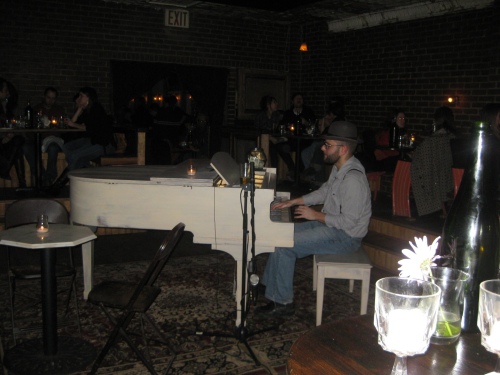 The food was amazing and we also shared a bottle of wine. After dinner, we headed to a nearby bar called Harefield Road for Katie’s co-worker’s birthday party. We only stayed for one drink because we were both tired and somewhere along the night I lost my voice entirely.

We headed home to bed and I could feel the congestion mounting in my head and chest. I tried to play it off like it was just my allergies, but by Saturday morning I had a feeling it was turning into a real cold.

We awoke on Saturday and my congestion and phlegm (sorry) was in full force. I managed to make it to brunch with Katie before heading home to bed. We went back to Harefield Road because they supposedly have a great brunch for $12. It did not disappoint. We each ordered the french toast, made from Challah bread, along with fresh fruit. Our breakfasts also came with coffee and a mimosa. 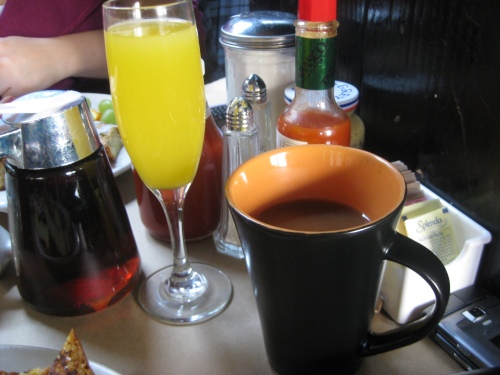 Brunch really hit the spot. However, I was unable to drink my mimosa – I was starting to fade fast. I said goodbye to my friend after brunch and trudged home.

I entered our apartment to find my Hubby doing exactly what I wanted to do: laying on the couch and resting. I proceeded to change into sweats and curl up on the couch and cough and blow my nose all day.

We watched as our temperature gauge showed that it was 46 degrees outside, while we both huddled under our blankets indoors. As afternoon turned to evening, I started thinking about my 9-mile run planned for Sunday. I wondered if I could push through the congestion to get it done. I decided it would be game-day decision, based on how I felt.

Hubby and watched the Olympics on Saturday night and I’m pretty sure I was asleep by 9:30-10:00 p.m.

I awoke Sunday morning to the sound of my own wheezing and phlegm rattling. I tried to speak and found I had no voice at all. Or if I managed to get a sound out it sounded like a small elf’s voice. Hubby thought this was hysterical.

So Sunday proceeded much in the same manner as Saturday. I decided that attempting my 9-mile run would be dangerous since I could hardly breathe. I was upset at first, but then decided that it’s probably lucky that this was a low-mileage long run week. If I had to be sick any week, this was probably the best one. I also know that pushing too hard when you’re sick can make you more sick. If my cold was just in my head area I probably would have gone, but it was in my chest as well and that’s what made me nervous.

So I watched in sadness as two 40+ temperature days passed me by without so much as a jog. Hubby and I alternated between watching the Olympics, sleeping, watching t.v. movies and watching Couple Retreat. We were a sad, sad pair.

Although, maybe it’s a good thing that we were both sick at the same time, rather than one person being sick first and then the other following a few days later. The bad side of this was that by Sunday night, it looked like a bomb had gone off in our apartment. It was a complete disaster, but I was too tired and sick to do anything about it. I was in bed again by 10:00 p.m.

Today I feel a little bit better – I still have stuff rattling around in my chest and congestion in my head, but all the sleep this weekend seems like it helped a bit. I am taking one more day off from running – I’m eager to get back into my training plan, but want to be sure I’m ready.

So how bout you all – did you enjoy the weekend?

And how do you cope with a cold? Do you tend to get sick if your significant other or roommate gets sick?

Have a great Monday everyone – hopefully it goes by quickly.

This entry was posted in Restaurants, Uncategorized and tagged Brooklyn, Olympics, sick. Bookmark the permalink.

5 responses to “Wasted Weekend and Weather”