Good morning all – happy Friday! How are you all today? I’m doing okay – dealing with a little work stress, but trying to figure it out.

So confession time – the Hubby and I played a bad April Fool’s joke yesterday. But for the record, it was totally his idea and plan. I may have posted on Facebook last night that I was “due in October and marathon training was over.” 🙂 Oh and the comments came flying in. Again – totally Bill’s idea, I just went along for the ride. But he made me post it on my FB page because it would be more “believable.”

Some people believed it and others called our April Fool’s bluff. So then Hubby downloads a picture of a positive pregnancy test from Google images and posts it on my page! And then I think more people were on the believing end. Our phones were ringing, we were getting text messages – things were getting crazy.

Finally, at about 10 p.m. I couldn’t take it anymore and I let everyone know the jig was up. The thought of going to bed with that big fat lie circling around was stressing me out and I was terrified I would wake up to my mother calling and screaming at me for not telling her first.

So phew – that joke is done and I don’t know if I’ll ever play another April Fool’s prank again. The things my crazy husband gets me in to. He is pretty darn proud of that joke though.

Did you play any April Fool’s jokes yesterday?

My co-worker also almost got me with the one about the Boston Marathon qualifying times being bumped up by 10 minutes. A momentary wave of panic swept my body and I’m pretty sure I started sweating, but then I screamed out “it’s an April Fool’s right?!!” And yes it is, but she was fooled by it!

Breakfast yesterday was some creamy and delicious oatmeal with banana and peanut butter. 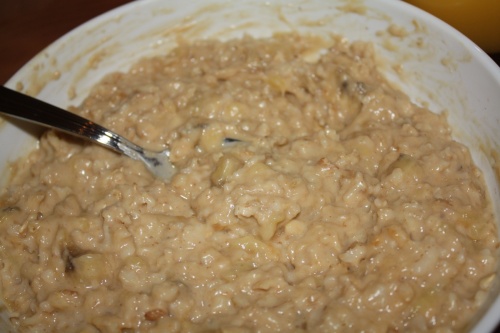 Lunch for Thursday was a peanut butter and jelly sandwich on an Arnold Sandwich Thin.

Afternoon snacks were unpictured, but they were Chobani with Kashi Go Lean and a small bag of walnuts and raisins.

After work, but before the Facebook fiasco, I went for a 6 mile run on the East River Promenade. It was much windier than I anticipated. Here are my stats from the run:

I was running most of that at a good clip, but not too far off from what pace I’d need to run the entire May marathon. That idea scares me a bit. Can I sustain for that long at that pace?

For any Boston Marathon qualifiers out there – how the heck did you do it?!!

After my run, the Hubby concocted our April Fool’s prank and I made myself a yummy dinner of a fried egg with cheese on an Arnold’s Thin with a side salad. 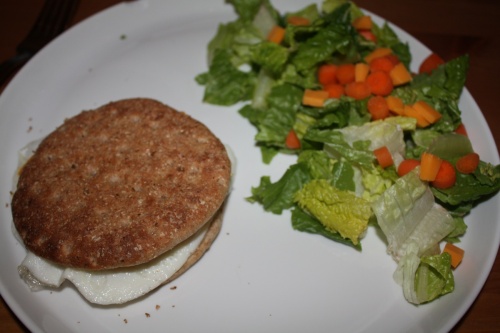 Then for dessert I had an apple with peanut butter.

I certainly had quite the peanut butter-filled day. It played a role in my breakfast, lunch and dinner. I’m sorry, but I just love me some peanut butter!

And that’s all folks! Tomorrow is the Scotland Run 10k race and it’s supposed to be gorgeous out. Yipee!! And I’m going to try to post a few reviews this weekend as well. Have a great Friday and weekend!