Running in the Rain: Half Marathon and 20-Mile Run

Happy Sunday all! I am going to make this a short and quick post since I’m sort of tired. Last night I attended the More-Fitness Magazine Half Marathon Pasta Party, where I met up with my cousin-in-law and a few of her friends. I’m usually not one to sign up for these parties and I was reminded of why last night. The food was pretty generic and unimpressive, but I didn’t go into it expecting a gourmet meal. Still, they could bring it up a notch next year. Although if I run the race next year, I will most certainly not be attending the pasta party, so it really doesn’t matter to me in the end.

Anyway – sorry for the tangent. It was good to catch up with my cousin a bit and talk about the upcoming race – and the terrible weather predicted. Everyone there seemed pretty optimistic that the rain would hold off, but I did not share their sentiments. My cousin actually brought down my light rain jacket with her – that’s how non-optimistic I was.

I stopped at the store on my way home from the pasta dinner and besides a bunch of healthy stuff, I also bought some Tostitos Hint of Lime chips – they are an addiction. So I snacked on a few of those before bed because the dinner hadn’t really filled me up.

I headed to bed around 10:00 p.m. and was up by 6:00 a.m. this morning (Sunday). I had my normal pre-run breakfast of an English muffin with peanut butter and a banana, as well as a granola bar and a big glass of water. I grabbed my Garmin as I headed out the door at 7:15.

I decided to catch a cab to the start since it was indeed RAINING when I left. And I’m not talking a sprinkle here and there. It was rain. As I tried to hail a cab, a girl in running gear came up right next to me. She asked if I wanted to share one to the start and I said heck yes! Apparently, she lives in the building right next to me – who knew?!

Made it to the start and decided to huddle under a tree until the very last minute in order to avoid the direct rain. I also noticed pretty quickly that my race bib had me placed in THE FIRST CORRAL!! What is that?!! My time on my bib said 7:49 as my expected pace and I did not think that would place me in the first section. Being the chicken that I am, I opted to line-up in the 2,000 corral, a few back from the start. We all huddled in the corrals for what seemed an inordinate amount of time and then finally we started.

And it was WET! This was a whole new kind of wet I’ve never in my life experienced. I was optimistic about the power of my waterproof rain jacket for the first 2 miles or so, but then slowly felt the wetness seeping in.

Oh oops – totally forgot to mention the BIGGEST bummer of the day…and no it wasn’t even the rain. My Garmin froze. Yup – totally froze at 7:04 a.m. apparently. I was pushing buttons like a crazy woman while lining up at the start, but finally just gave up and decided to wing it. After Googling the issue when I got home later, I learned I needed to hold the Start and Reset buttons down at the same time for about 10 seconds. I had tried holding them both down, but for only a few seconds. So this presented a HUGE problem. Yes, I wouldn’t be able to track my speed during the race, but I also needed to run extra after the race to get in my last 20+ run for training. I did a few mental calculations and planned out a route I thought might work.

So, back to the race. It began, it was raining hard, and I was Garmin-less. Sounds like a worst-case scenario right? Well yes, it was, but I also just decided to run whatever pace I felt comfortable with. The first few miles were really rough. My body wasn’t warmed up, but my clothes were getting soaked and it was making for a very uncomfortable run. Finally, by about mile five I was sufficiently warmed up and used to the rain (as used to it as one can get).

I made it around 1 loop and was even feeling pretty happy when the rain cleared a bit and it was only drizzling slightly. That was short-lived when it started raining hard again around mile 9 just as I was approaching the big hill on West side near 110 Street. Fun. Around this time, we also started passing the walkers, which meant I was basically running in the center of the drive the whole time – a.k.a. running more than required. Awesome.

But I’m making this sound horrible. Despite the rain, the cold, the lack of Garmin and the extra mileage, it was actually a good race for me. In fact, I PR-ed. Haha! My official finish time was 1:46:00!! That is about 3 minutes faster than my half marathon in January. Average pace was 8:05 minute mile and I came in 168 place overall. So maybe my bib number wasn’t all that far off?

Yeah – go figure, I ran my best in the worst of conditions. I can’t explain it.

So after I crossed the finish and marveled at the fact that they announced my name even without my racing bib on display (those sly NYRR officiators are so quick), I grabbed a gatorade and water and washed down a Gu I’d had in my pocket throughout the run. I paused for a moment and argued with myself about continuing the rest of my long run or calling it quits and heading home (I sooo wanted to go home). But guilt and fear won out (afraid I wouldn’t be prepared for the marathon) and I trudged on. I headed West out of the 72nd Transverse and then headed South again to do another loop. The funny part was that I was mixed in with runners and walkers still racing. This also served as incentive to keep running since I was being cheered on (I know I’m such a liar) and I figured that these other racers were going to be in the rain for the same amount of time as me, so if they could stand it – so could I.

I did another loop and then turned into the 72nd Transverse from the West side and headed North up the East side. I left the park around 85th and made a bee-line for home. Walking indoors out of the rain felt amazing – everything I’d dreamt it would be and more. I later used mapmyrun to determine how far I’d run and it was 21.3 miles! I was hoping to get to 22 this time around, but I will happily take 21.

Here are a few photos of my state after this wretched run: 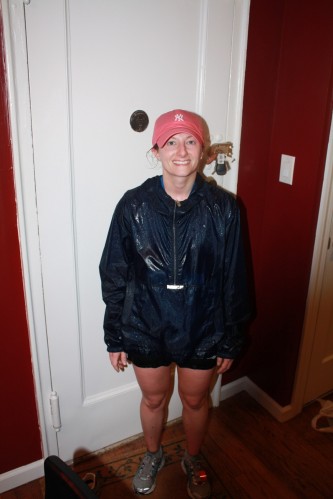 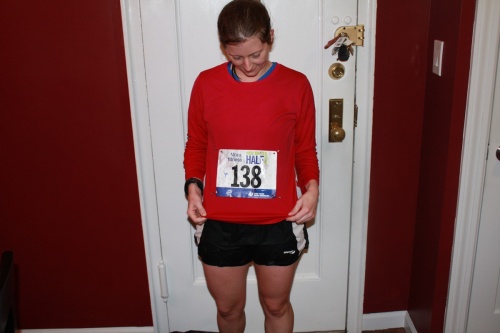 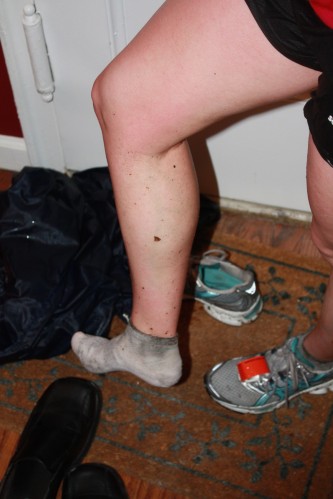 And my nasty socks and leg – those socks used to be white.

I literally stripped at the front door and immediately jumped in the shower. My legs were screaming for a good stretch, but I had to get rid of all the mud and muck first. After my quick shower I gave my legs what they were begging for and stretched really well – also including some rolling with my marathon stick.

Since then, I’ve snacked on this: 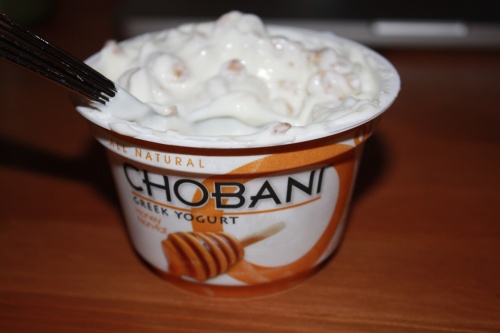 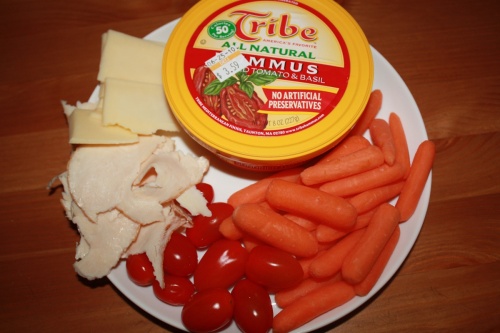 I also ate quite a few Hint of Lime Tostitos as well. And Hubby and I just finished watching The Blind Side and I loved it!! So cute.

Anyway, this has turned into a super long post. But I am very happy that my last 20+ run is finally done and I didn’t skimp out on it like I soooo wanted to! Yay for determination and perseverance despite ALL ODDS!

Hope you’ve had a great weekend. What was the best part of yours? Enjoy the rest of your Sunday!

22 responses to “Running in the Rain: Half Marathon and 20-Mile Run”