Happy Christmas Eve!! I can’t believe it’s already here. Furthermore, I can’t believe I’m working today. It seems that everyone either has the day off or took it off. We get out at 3:00 p.m. and since all we have planned for tonight is an 8 p.m. Christmas Eve mass in Upstate NY and then relaxing with my parents, I didn’t see the point in taking a whole day off and using up my time.

Hence, I’m at work and the place is a ghost town. As was the bus and the subway down here. It’s an eery kind of quiet.

Do you have fun Christmas Eve plans?

I know people whose friends throw Christmas Eve parties, but my group has never really done that – Christmas Eve and Day are pretty much family-time for us. I am looking forward to a party on the 26th though! 🙂

So here’s a quick recap of yesterday’s eats:

Breakfast was a multi-grain English muffin with half peanut butter and banana and half cranberry relish I made the other night. And the remainder of the banana on the side, with a glass of light cranberry juice.

Lunch was leftover quinoa! It tasted even better the next day, I think because it was marinating in soy sauce all night.

My afternoon snacks were blueberry Greek yogurt with granola. 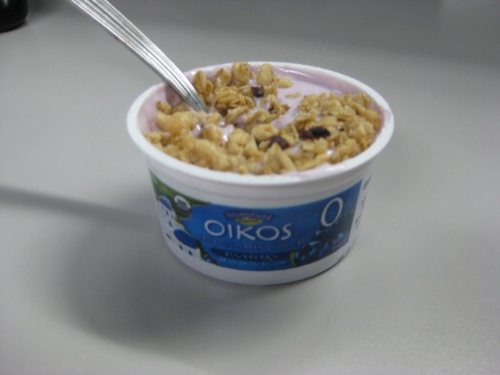 And a few chocolates. The first chocolate I chose had a cherry filling that I just didn’t like. I’m not a big chocolate and fruit person – are you? So I had to go back in for a different one…and then I may have had one more (unphotographed).

I had a bit of headache toward the end of the day, so I didn’t end up hitting the gym after work. Instead, I came home, made dinner and we watched a movie and then I sort of packed.

Dinner was grilled cheese with apple and a glass of wine. I was jealous that so many other people were already on vacay and I wanted to feel like I was too – hence the wine. 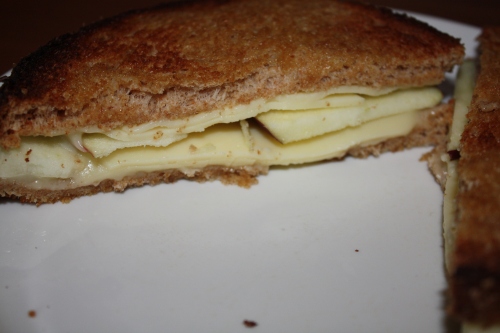 Can ya see the apple? It was a wonderful addition to this traditional sammy.

What do you like to add to your grilled cheese (if you eat it)? I’m also a fan of adding tomatoes, not with apple though.

After dinner, Hubby and I watched Revolutionary Road and had mixed reactions. I didn’t love it, but didn’t hate it either. I thought it was an interesting view of suburban married life and I thought Kate Winslet and Leonardo DiCaprio gave wonderful performances. It was a little dark at times, but that didn’t bother me. Hubby thought it was very slow and boring. We agreed to disagree on it. 🙂

Then I read my book for a bit and went to bed. This book, Ahab’s Wife, really has me hooked. Every few chapters I keep being utterly surprised by what happens in the main character’s (Una) life and how she copes with it. There have been a few moments that have caught me off guard with the amount of crudeness discussed or displayed, but the way it’s written allows me to digest it, accept it and move on. In this respect, the book reminds me a bit of John Irving’s style of writing where the absurd is never shocking and the shocking is never absurd.

I also think it’s got to be hard for writers to convey the “shock factor” in a novel. In movies, the visual aspect is key in getting this across, but in books, less is sometimes almost more, as it allows the reader’s mind to fill in the gaps.

Anyway – enough book rambling.  I’m really excited to head upstate tonight after work and see my family. The Murph is coming with us in the car – that’s always interesting. When he was a kitten he loved the car, but as he’s gotten older he seems to have developed car/motion sickness. So we have to keep him in his little carrier and not let him look out the window.

Happy Christmas Eve all!! Safe travels and maybe I’ll post tomorrow – maybe not. We shall see.