“Over Easy” Ain’t So Easy

Happy Friday and happy long weekend for some! Oh and Happy Valentine’s Day soon. Hubby and I don’t do anything for V-day. Neither one of us has ever really been into it. We’ll actually be traveling upstate this weekend for a quick stop at my parent’s house and then on to his parent’s house. So we’ll be with his parent’s on Valentine’s Day. What are your plans for the romantic holiday?

I hope everyone had a good day yesterday. Mine was pretty decent. I started off breakfast with some boring Kashi Heart to Heart cereal with almond milk. Sometimes you just feel like having some cereal – you know?

Work was busy yesterday. After the snow on Wednesday and our office closing early, there was lots to catch up on. I ate my lunch very late in the afternoon and had leftover bulgur with chicken, veggies and salsa from the other night. 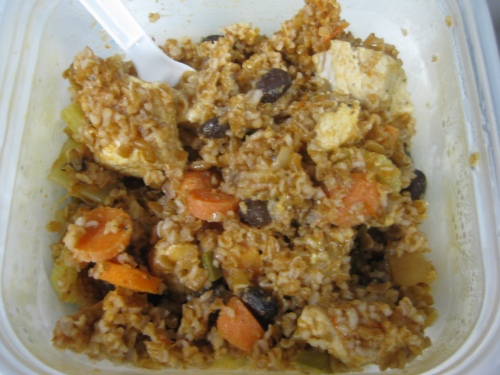 My afternoon snacks were fairly light – a pineapple Chobani yogurt and a pumpkin muffin around 4 p.m. 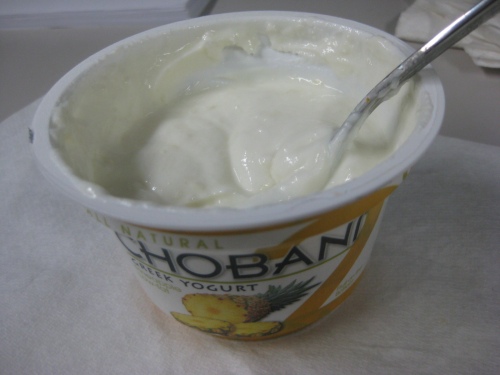 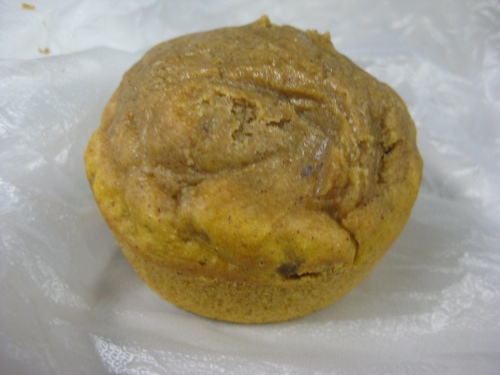 I am loving these muffins as a snack. They give me energy, but don’t fill me up too much. And with that added energy boost, I got myself to the gym right after work to try to squeeze in a 6-mile run.

I’d like to name this next little section: Tales from the Habitual Gym Rule-Breaker…

Well, I did it – I got in my 6 miles, but not without some guilt. Things started off alright when I arrived and saw hardly anyone on the treadmills. But around mile 4 things started to fill up and I realized that 3 of the treadmills must have been out-of-order because people would get on and then hop off after a few seconds. You’d think that during the height of winter the gym would to try ensure that all the machines–especially cardio machines–were working right. So no one was actually waiting for a treadmill until I hit about 5.6 miles. And at that point I was soo close to 6 miles that I could not stop. So I increased my speed to 8.3 (holy cow – I’ve never run that fast on a treadmill in my life!) and finally finished up my 6 miles in 49:12. It is definitely the fastest I’ve ever run 6 miles on a treadmill and toward the end I felt like I was in a race and experienced a minor adrenaline rush. But then when I finished I felt really guilty and actually apologized to the girl waiting in line that took my machine.

I did some ab work while I sweated profusely and then headed home. I certainly didn’t want that girl to come find me and yell at me. 🙂

Once I was home and showered I made some dinner. I have been craving eggs recently, and yes, I had them on Wednesday night, so two nights in a row is probably not a great idea, but so be it.

I was picturing a beautiful egg sandwich in my mind and decided to attempt to fry an egg “over easy.” I went through a stage in high school where I ate an egg sandwich with an over-easy egg every morning for a while, but my mom would always handle the egg part. This time it was all on me and I was intimidated. I may have even Googled “how to fry and egg” before I got started.

My first attempt was pathetic. I just plopped the egg onto the skillet from rather far away and watched as the yolk in the center broke and spread into the white area. I contemplated just throwing it on the sandwich and making due, but I wanted to do this right. So I ate that ruined egg (I couldn’t waste it) and set to work making another.

This time I was much more gentle and slow in my release of the egg onto the skillet. I was psyched when it landed gently with the center yolk in tact! I cooked it that way for a bit, added some pepper, and then ever-so-gently flipped it over and let it cook on the other side for about 30 seconds. I flipped it back and let it cook for a little longer and then decided it was done!

My very first fried egg over easy!! I was so proud. I placed it gently on an Arnold Sandwich Thin along with a slice of cheese and my egg sandwich was complete. 🙂 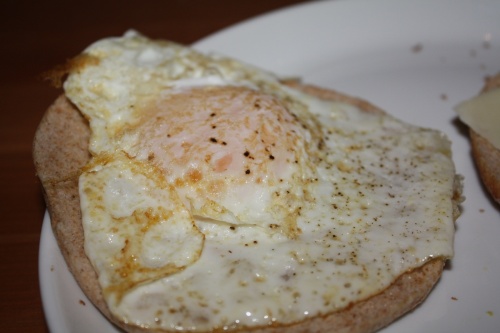 I know – my small feat is probably a mindless routine for many, but for me it was a new challenge and I’m glad I figured it out – all on my own too. I fully enjoyed my delicious egg sammy and have a feeling this little fella will be showing up again soon.

Dessert was….you guessed it – another muffin. I know two muffins in a day maybe isn’t the healthiest option, but after my super-fast 6 miles I decided I needed it.

What is your favorite way to cook eggs (if you eat them)? And who taught you to make eggs? The over-easy egg sandwich might be my new fave. I was a scrambled egg or omelet girl before, but my heart may now belong to another egg.

Alright – that’s enough rambling about eggs. I hope everyone has a wonderful weekend and Valentine’s Day. Anyone going to check out Valentine’s Day – the movie? I’d like to see it, but Hubby will not be up for that one. That will have to be a girlie movie night. 🙂