It’s the first Tuesday of 2010, which means we made it through the first Monday of 2010!! Hopefully this week will fly right by. But that means my first race of 2010 will be here before I know it. Eeeks!

I’m running the NYRR Fred Lebow Classic 5-miler in Central Park this Saturday and am a bit nervous because of the frigid temperatures predicated and my lack of recent good runs. Is anyone else out there running it as well?

I’m going to try not to think about it or worry about it too much till Saturday. So let’s recap yesterday’s eats:

Breakfast was boring old Kashi Heart to Heart cereal with almond milk and a side of light cranberry juice.

I was pretty busy at work on Monday considering the amount of vacay time we’ve had lately, so I squeezed in a mid-morning snack of a Coffee-Nut Scone around 11 a.m.

I got pretty busy and then all of a sudden at 1:35 I remembered that I had a phone interview scheduled for 2:00. That wasn’t going to leave me much time for lunch, so I decided to eat my snacks first.

I had a strawberry Chobani yogurt with granola and some carrots.

Then around 2:45 I was finally able to have lunch and I had leftover venison chili. 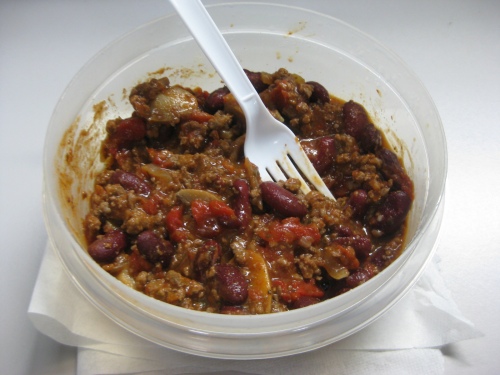 After work I hurried over to the gym to try to beat the after New Year’s rush of people. Surprisingly, it wasn’t too bad. However, they were giving a lot of tours, which tells me the onslaught is coming soon. I hopped on the  treadmill and ran the following:

Definitely not my fastest, but I was still a little stuffy in my nose and congested in my chest.

I stopped at the store quickly on the way home to pick up a few things for dinner and was overwhelmed by how busy it was. Note to self, Monday is not a good grocery-shopping day.

For dinner I adapted this recipe for a Crustless Spinach Quiche. The red text and cross-outs show where I added or made changes:

In a small mixing bowl, beat cream cheese. Add milk, egg substitute and pepper; beat until smooth. Stir in remaining ingredients. Transfer to a 10-in. quiche pan coated with nonstick cooking spray. Bake at 350 degrees F for 45-50 minutes or until a knife inserted near the center comes out clean.

My first piece – I had two pieces in total.

The recipe was very good, but I used a smaller dish than recommended, so it took longer to cook, which was annoying because I was hungry. But all in all, a good dinner.

And then dessert was another Coffee-Nut Scone, but Hubby suggested maybe adding some frosting to the remaining scones. I gave in and it wasn’t too bad actually.

The rest of my night was very quiet, I read a bit, watched part of a football game Hubby was interested in and I’m ashamed to admit I also watched part of The Bachelor. I had to turn it off at one point because it was so awkward and the girls were terrible. It was kind of funny at the same time though.

Health in the news…

Sleep loss may affect health by curbing exercise – Better get that rest to keep up your workout schedule.

Five ‘eating better’ foods to slip into your diet in ’10 –  A lot of this is common sense stuff, but it does remind me that I need to drink more green tea.
Study Says Women With Mate Get Heavier – Essentially the study found that women living with a man (married or not) gained weight after co-habitating, and if they had a child, their weight went up even more. I’ve heard from people that they gained weight once they got married (although I don’t think you can state this is the norm), but this sentence made me laugh out loud:
“This does not explain the still larger weight gain in women who became pregnant.”
Did they not get the memo that a woman’s body changes after she has a baby?
I don’t put much stock in these kinds of studies, but it does raise some interesting questions:
Has your eating changed at all since living with a significant other (either currently or in the past)? What about after marriage?
I can tell you that I weigh less now than I did when I met my husband. I think I’ve actually started to eat healthier foods and exercise more since we’ve been together. It helps, of course, that he is an active person who also eats well. I wonder if things would be any different if he weren’t that kind of person. Food for thought…
Have a great Tuesday everyone!