Book Club, Race for Hope and a Baby Shower

Busy – that is the word to best describe my past week. Coming back from a long weekend (Labor Day) is always tough because it means squeezing a ton of work into four days.

But as busy as things were, I had to take time out to go to book club on Thursday night. We meet monthly and are each responsible for selecting a book for our month. This past month, we read The Hunger Games and you can check out my review here. But the first book was soo good, that most of us read the second and third book as well. Every month, we also try to choose a restaurant that goes along with the theme of our book. This month we thought it would be kind of tough, but turns out that Korean BBQ was the perfect choice! We went to Yakiniku West in the East Village. And soon it was time to cook our meat and veggies, just like Katniss did in The Hunger Games – okay… well kind of.

It was a great choice. We split four entrees, a few appetizers and several pitchers of beer and it was still very affordable and delicious!

With Thursday over, it was time to head upstate again on Friday evening. We drove up to Albany and got there in time to watch my cousins play in the CBA vs. Albany football game. CBA crushed them. I headed home early and went to bed because I had a race the next morning!

On Saturday morning, I ran the Race for Hope in Slingerlands, NY with a few friends. I can’t say it was the most organized thing in the world. They had one person working the table where they were handing out the tags, so the race started about 15 minutes late. But regardless, we were off and running. The course was a little hilly and pretty suburban, but it flew by.

After the race, we “raced” home to shower and get ready for a friend’s baby shower. I didn’t have my camera with me, so I have no photos from the shower, but I’m hoping friends will send a few my way. We had a gorgeous day for the shower, which was outside, and it was a lot of fun. Lots of food, fun baby stuff, ginormous CUPCAKES, and a very pregnant friend who looked fabulous. Seriously, she is eight months pregnant and so very mobile and comfortable looking.

After the shower, I headed to Clifton Park to spend the evening at another friend’s new house. She moved in about a month ago and already it’s looking pretty good. Know what else looked good? The mounds of food we brought…

…and devoured. We had so many awesome snacks, that we didn’t even end up needing to make the actual dinner foods that were prepared. To be honest, sometimes I prefer that. I love appetizers and snacks.

The night was filled with lots of laughs, girl talk, wedding talk, baby talk, and almost anything you can think. We go off on some serious tangents when we get together.

On Sunday it was time to head back to NYC, but not before stopping at Lindsey’s Country Store for some freshly picked apples and apple cider. It’s such a cute little store and I love it because they spell my name right!

We bought some gala and honeycrisp apples. Is there anything better in the fall?

And lastly, I will leave you with what we came home to on Sunday night… 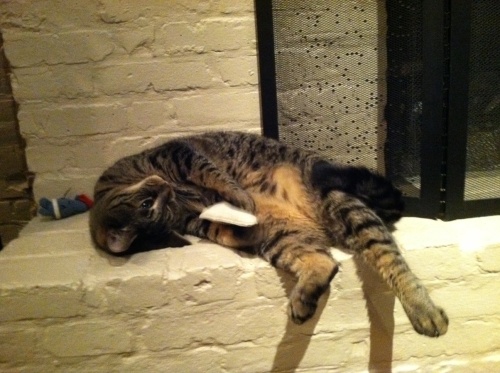 Such a teaser – as soon as you go over and try to smush his stomach he tries to attack you. He’s sneaky like that.

What are you most looking forward to as fall approaches? I am torn between fall clothes, delicious fall flavored coffees, foliage, our wedding anniversary and apples. If you couldn’t tell – fall is my favorite season!