Week 12: A Needed and Appreciated Cut Back Week

Week 12 of marathon training in O-VER! We are slowly inching closer to marathon day and I gotta tell ya – this warm weather is making me a little nervous. The Boston Marathon will be run tomorrow in 80 degree temps in the middle of April. What will it be like by the end of May? I am very scared that they will either cancel our race Memorial Day weekend or it will be truly torturous to run in crazy hot temps.

But, there’s no use speculating and getting myself all worked up right now. There are still 6 weeks of training to go with two more tough long 20 mile runs ahead of me.

I’m getting ahead of myself again. This post is a recap of week 12 of training, which was a much needed and appreciated cut back week, as the title says. This week I had 34 miles on my plan and I came in pretty close at 33 miles for the week. Here’s what the week looked like:

It was a pretty light week, which was super nice considering I was tired and lacking in motivation – as Wednesday clearly showed. I just came home and wanted to nap rather than run. It happens sometimes when you are in the thick of training. At least for me anyway.

But, by Saturday morning I was feeling more motivated and ready for a longish run. My plan called for 12 miles, but I ended up running nearly 13. I was running through Central Park starting around 9:20 a.m. and got caught up in some race going on. It felt weird to be running with the group when I wasn’t really in the race and I kind of just wanted to get away from them and do my own thing. Because of that, I ended up running some of those first miles faster than planned to get away from the other runners. My splits looked like this: 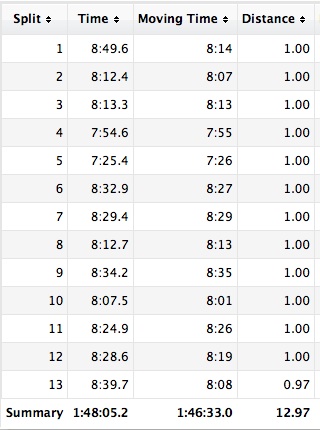 Yeah – it was a much faster run than I expected. But it also felt good to push it a little.

After my longish run, Hubby and I headed out to an afternoon show. At the Colon Cancer run we won tickets to a show and today was the day. We headed to the theater district to see:

It’s a new show that came over from London and I thought it was really good. It was very funny. I’d recommend it. The main character REALLY likes eating and I could totally sympathize with him – especially now during the peak of marathon training. I seem to be devouring everything and have a real sugar addiction.

Anyone have any tips for cutting down on sugar and beating those terrible sugar cravings?